Ukraine on the brink of a (civil) war? 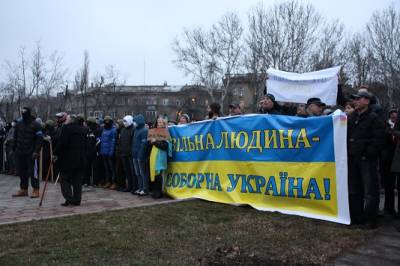 The tension between Ukraine and Russia heightens by the hour. The war of words can easily turn into a real war between both countries or a civil war in Ukraine.

The situation in Ukraine is quickly moving to a point of no return. The tone on both sides hardened and is becoming more and more belligerent. Today it reached a new level when Ukraine’s Prime Minister Arseniy Yatsenyuk accused Russia of intending to start World War III. Those words came shortly after Russian Foreign Minister Sergei Lavrov condemned the Ukrainian government for its operations against separatists yesterday, resulting in at least three dead. Lavrov called the action a “bloody crime” and stated that the responsible persons in Kiev will feel the consequences.

Already yesterday the Russian President Vladimir Putin called the action against the pro-Russian groups a “serious crime against the own people”. He also repeated his statement that he will take action whenever he thinks that the Russian minority is threatened. The Russian parliament already gave approval to military actions weeks ago, opening the way for Putin to send more troops to Ukraine.

Events are increasing in frequency rapidly. Taking only the last couple of hours news involved a manoeuvre of the Russian troops just at the border to Ukraine, explosions at a pro-Ukrainian checkpoint in Odessa and the explosion of a helicopter and plane near Kramatorsk. Furthermore the Ukrainian government started the second wave of actions against pro-Russian groups in the Eastern parts of Ukraine. And even OSCE observers, send to stabilise the situation, have been captured by pro-Russian groups in Slaviansk.

In-between both sides increase the propaganda war. The Russians are way more effective in this than the Ukrainian side – but both try to spin news in a way that supports their own interests. For the Russians the main goal is to divide the Western countries. Especially Germany is important in this. There is a latent aversion against the U.S., making parts of society turning a blind eye to the real situations. Putin, with his long experience in the Russian intelligence service, is an expert in making use of this and playing the anti-American card, often successful with the left.

It becomes increasingly difficult to tell for outsiders what is really going on. But clear is that both countries are at the brink of a war. In the current situation any small event could trigger a war between both countries.

The government in Kiev is between a rock and a hard place. If it takes no action against the pro-Russian groups it will likely completely lose control. That would give way to independent armed groups to pursue their own goals and would likely result in a civil war.

On the other hand, action against the pro-Russian groups will also result in violence, as the past 24 hours showed. Those groups, backed by Russia, are not willing to accept the government in Kiev and will fight back, resulting in more people being killed. With that Putin would have an excuse to intervene and to send troops. Once Russian troops are in Eastern Ukraine the division of the country will be unavoidable. Based on Putin’s words and actions over the last weeks it is unlikely that he would order his troops back without Eastern Ukraine being at least independent from Kiev.

Meanwhile all efforts from the Western countries are still slow and half-hearted. Talks about sending more OSCE observers are hardly moving forward. Sanctions against Russia are far from tightening. In this governments still weight economic interest higher than the fate of the people in the region. And it is worrying how much understanding there is amongst elites in Western Europe for the actions of Putin, blinded by the anti-American sentiment.

Putin will not be persuaded to change course without a strong reaction from the West – but without Russia there is no solution to the situation in Ukraine. As long as the pro-Russian groups feel supported by Putin they will not agree to whatever truce. And without an independent force – as a significant amount of OSCE observers, maybe even U.N. peacekeepers – it is unlikely that Ukraine will come to a rest soon.