Ukraine and Crimea - A European answer on next steps 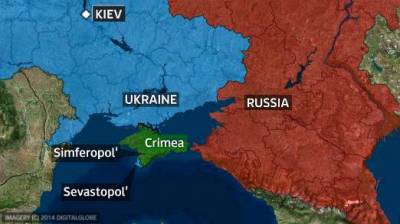 Today the G7 leaders will have a brief summit to discuss the situation at Crimea and in Ukraine. There are obvious differences between the U.S. and most European reactions so far. What would be a European approach to the current situation?

This European stance has it roots in the last century which brought two devastating wars to Europe with millions killed, countries destroyed and lasting hatred between countries as result. This remains a strong lesson for most Europeans and guides the European reaction to conflicts. This lesson is even more present in 2014 as it is 100 years after World War I started. Comparing today to 1914 was already all over in the media even before the conflict around Crimea started.

With military force being no option the strategy from a European viewpoint has to focus on 2 things: stabilise Ukraine and reduce energy dependency.

First focus has to be Ukraine itself. The land has to be stabilised and it has to be made sure that there is no new excuse for Putin to deplore further actions.

This means on one hand support to avoid a financial collapse of the country and to boost growth. This will be highly unpopular in most countries, especially after all support that has been already given over the last years within the EU. But the people in Ukraine need a perspective. One reason for the support for Putin in some parts of the country is that Russia simply promises money and a better pay. Yes – it is an autocratic system, less freedom etc – but you have to keep Maslow and his pyramid of needs in mind. People are poor and their first need is food and safety. If there is no credible perspective for the future it just makes it easier for whoever has an interest to do so to set them up against the central government and to create an unstable situation. Et voila – here comes the excuse for Putin for a new intervention.

On the other hand, there has to be a credible protection of minority rights in Ukraine. Sending OSCE observers was a good first step. Next should be changes to the Ukrainian constitution to enshrine the rights of (ethnic) minorities. And this can very well be a condition for the aid given. It should also be discussed to transform Ukraine into a more federal state with more freedom for the regions to create their own policies. This will help to reduce the potential for future propaganda about “threatened minorities”.

The second focus has to be energy. Europe is still quite dependent on Russian oil and gas. That makes it vulnerable for blackmailing. Efforts should be increased to reduce its (and Ukraine’s) dependency on Russian oil and gas. There are no short term solutions for this but it has to become a focus. This can also be supported by the U.S. by exporting LNG to Europe but has mainly be driven by own gas exploration, diversification of sources for import and – last but not least – more renewable sources. This will have two effects: Russia will be less able to hold Europe hostage and it will hurt Russia’s economy, showing that the annexation of Crimea has a price for Russia.

Yes, all this would mean to accept that Crimea has been annexed by Russia. Official recognition can be withheld but in reality only military force would reverse the situation for now – and this is not an option for Europe. But it has to be clear that this will not go without consequences. Some of those will be diplomatic and some economic, as e.g. importing less gas and oil from Russia and the already implemented blacklist of some Russians.

But the most important thing for now is to avoid any new excuses for Russia for any new land grab in Ukraine. This is also to avoid that we might reach a point of no return. Focus for now is de-escalating the situation and avoiding any new aggressive steps. Russia will at the end pay a price for this action – being more isolated in the future and having less economic power. Furthermore Ukraine will now turn westwards. With that Putin managed himself to castrate his vision of a revival of the union of former Soviet states and to reduce the Russian sphere of influence.