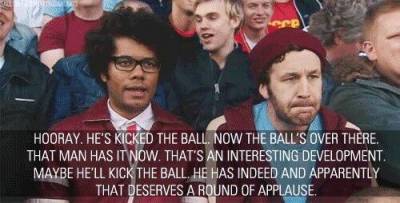 Football – or soccer as the Americans call it – just to be different from the English ;-) – is an old sport simulating scarcity while trying to force strong individualist and some narcissi into team behaviour.

There are 22 people, all want to play with a ball – 20 just want to shoot it, ideally into the quadrangular construction at either short side of the field, called goal and 2 just want to hold and keep the ball. That’s why those two are called the (goal)keepers. ;-)

Although 22 people want to play ball there is only one ball at the time available in the field. So they have to fight for the ball. It’s a bit like with kids – once one has the ball, all others want it as well. And as it goes with kids – if it isn’t working at some point they will resort to usage of force and mean tricks.

To force the team behaviour the 22 players got divided into 2 teams of 11, each having one goal to shoot at and one goalkeeper, who’s in the other goal. To give the whole thing a bit of direction it was decided that you should only shoot on the goal where the keeper of your team is not in. Finally a competition element was added: the team that manages to shoot more often into the goal of the other team wins - whereas the keeper tries to prevent that the ball gets passed him (or her).

As not all get the idea of that they are in a team and that it is not about which individual scored the most goals, another person had to be added – the coach. The coach is not allowed to enter the field during the game. Therefore they can be easily identified: it’s the person that makes wild dances on the sideline when the players of their team forgot again what he told them.

To keep the medical costs under control – and to make it more posh than rugby – some rules have been added about fair play and that you are not allowed to play the ball with your hand or arms (except for keeper – he is privileged as he is allowed to hold the ball).

As not everyone agrees with these rules there was a need for an additional person on the field – the referee. Basically a sort of overseer – and if a player behaves really badly he can ban the player in question for the rest of the game. But as always – some are quick learners and find ways to play with the new rules. So some players found that if they are acting well enough they can get some extra ball time or even get rid of other players competing for the ball. The advantage is that this makes the play even more interesting for the spectators – and as some players are very good at acting they can go for an acting career after they stop with football.

Of course there are more rules – but you shouldn’t care about those. Most self-proclaimed experts don’t know them neither. This half-knowledge only adds to the fun for spectators: everybody can play expert, fiercely disagree with decisions by the referee and get into heated debates with fellow spectators. That ensures that football keeps people busy way longer then the 90 minutes the games is on.

So – go out and enjoy the rest of World Cup!